Friday 04 August, 2017
Agora Public Affairs & Strategic Communications presents a regional study of the public’s perceptions of the relationship between the State and the Productive Sectors in Bogotá 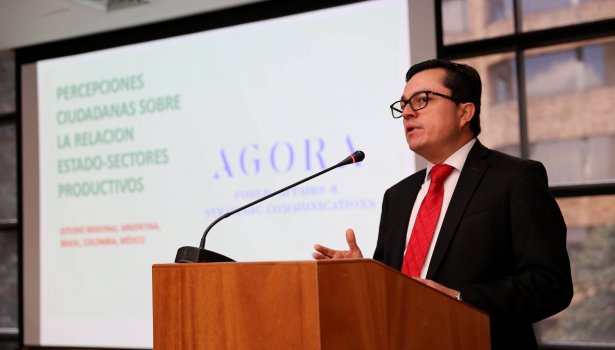 On 1 August, in Bogotá, Agora Public Affairs & Strategic Communication presented its first regional study of citizens’ perceptions of the relationship between the state and the productive sectors. Leading the event were Ricardo Ávila Pinto, Director of the Portafolio newspaper, Santiago Lacase, President of Agora Argentina, and Miguel Ángel Herrera, President of Agora Colombia.

Dozens of CEOs of companies from different sectors, politicians, academics and journalists came to hear the results of the study carried out by Quiddity, Untold_’s research and Big Data arm. The study was carried out in Argentina, Brazil, Colombia and Mexico with over 3600 people interviewed.

Lacase, who presented the results, noted that Colombia demonstrated a ‘more mature’ position with regard to perception and trust in private sector companies in comparison with the other three countries where the study was carried out. According to the data gathered during the research, in Colombia, 54% of citizens believe that it would be better for the country to have more private companies while 37% would prefer to see more public ones. This picture is different in Argentina where the percentages are 36% in favor of the former and 41% the latter.

The study also measured citizens’ level of trust in different productive sectors, making a comparison with perceptions of how the state regulates said sectors. As Santiago Lacase noted during the presentation, “a high level of mistrust worsens the reputation of private companies but also increases their chances of being regulated”. This is the case in Colombia in sectors such as mining, banks and breweries, where 50, 44 and 41% of citizens respectively would like to see taxes raised.

Miguel Ángel Herrera added that “the private sector should be careful to preserve its image, but it should also pay attention to citizens’ expectations with regard to the regulatory situation.”

Meanwhile, Ricardo Ávila emphasized “private activities’ good reputation with regard to regulation and trust,” and warned that in some sectors “issues with corruption are clear; negative opinions increase with every new scandal.”