On 7 April, the Ministry of the Treasury and Public Credit published the Decree Project that will regulate the tax incentives for the Areas worst affected by the armed conflict, the so-called ZOMACs, for comment.

The regulations will govern the modifications included in Law 1819 of 2016 (Tax Reform) to clarify, firstly, the beneficiaries of the progressive tax incentive as well as the procedure for applying for them. In addition, the decree project will set specific figures for investment and job creation that the companies located in the Greatest Conflict Areas must meet to enjoy the progressive tax benefit as well as how the incentive might be lost and regulations to prevent abuse.

It is concerning that the first aspect that must be decided by the Government: which municipalities will form part of the ZOMACs, has as yet not been defined in the Decree Project. The territory under whose jurisdiction the tax incentives referred to in Law 1819 of 2016 will apply is thus still an unknown. As things stand, while it is not clear which municipalities will enjoy the exemptions, businesses will not know whether they benefit from the conditions or not. This leads us to wonder at the purpose of publishing a regulatory project for comment if the crucial geographic factor has not yet been determined or made available. Determinations such as these show that the Government is planning to unilaterally make decisions that affect the country, such as the determination of the Areas of Greatest Conflict, without any prior democratic input.

In addition, the regulations define the figures, in terms of assets, for how tax-paying companies will be categorized: micro-business, small business, mid-sized business and large business, and the conditions for investment and job creation for those that opt to take part in the new tax system following Tax Reform. For these purposes, these companies must include ‘ZOMAC’ in their registered name during the period in which they receive the tax incentive and be involved in the following economic activities: industry, agriculture, service or commerce. If they need to carry out additional activities they must do so by sub-contracting. Businesses must be especially careful about the activities they are involved in because if they carry out an activity other than that expressly stated in this decree, they will be prevented from accessing the tax benefit and lose investment and market share.

We observe that the decree project focuses its analysis on four major factors to determine how much to reduce income and other taxes: 1. Type of business (small, medium, large) 2. Economic activity (Service, Commercial or industrial-agricultural) 3. Value of investment, and 4. Jobs created. With regard to job creation, the new companies must guarantee a link and access to organized groups of rural workers, indigenous communities, people of African descent, locals, woodsmen and rural workers living in ZOMACs, said links being direct or indirect employment. The regulation’s description of indirect employment is as follows: “This is employment generated by companies or natural persons whose fiscal domicile is located in a ZOMAC, linked to suppliers of goods and services for the company benefitting from the tax incentive from 29 December 2016”. So, indirect employment is also restricted to other businesses located inside a ZOMAC: said companies will not be able to count the contribution made under the auspices of a supplier of goods or services that does not benefit from the special regime addressed by the decree. Finally, direct employment only refers to labour contracts signed specifically by the company in question.

In addition, the new companies receiving the tax incentive each year shall have to meet and maintain minimum levels of investment and employees in accordance with the type of company.

We observe that some activities require greater investment and a larger workforce than others, while some require less investment but more employees, depending on the size of the company.

The above is determined in the table annexed to the Decree Project, which is presented below: 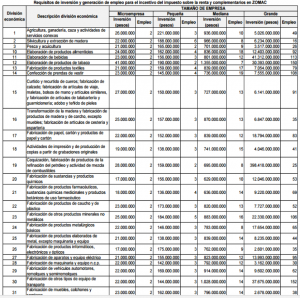 Another unsettling situation related to the Decree Project is that in addition to the reductions for the creation of new companies in the ZOMACs, the regulations govern what has been called ‘Works for taxes’, which establishes that companies that last year recorded income equal to or greater than $1.070 million may apply for the benefit. These companies can contribute directly to the projects approved by the Government for post-conflict development and this investment shall be discounted from income tax up to a maximum of 50% for up to ten years as long as the work continues. However, the concerning aspect is that the Ministry of the Treasury, under a provision aimed at tax incentives and revenue collection, is regulating provisions related to public contracts.

For example, the regulation involves the creation of a Project Bank that will be administrated by the Agency for the Renewal of Territory and the National Planning Department. One of the distinctive aspects of the methodology of works in exchange for taxes is that it reduces the terms for the provision of licenses by half, thus modifying law 1450 from 2003 and 1753 from 2015, which takes us back into the realm of express licenses without the essential specifications.

In addition, to apply for the works for taxes scheme, the decree establishes a specific procedure related to the execution of works, stating that each company shall have a period in which to present their project running from the day the Project Bank opens the window for applications until the last working day of March each year. In addition, they shall have to demonstrate that the board of directors has approved the project, provide a letter to the Agency of Territorial Renewal, the National Planning Department and Dian declaring the company’s interest in the work and an insurance policy that covers at least 10% of the work. The decree also outlines the need for the creation of a trust and the depositing of a sum equal to the value of the project as a guarantee of its fulfilment. This must be examined with regard to the terms of the General Statute for Public Contracts and especially the terms for the constitution of a public trust.

With the above regulations, the Government is seeking to promote investment in Areas of Greatest Conflict seeing the post-conflict area as potentially propitious for the generation of employment and growth in the country, but, as always, there are irregularities in the procedures and the regulatory framework that as has been made clear, have not yet been made available to citizens. Finally, we must ask where the resources mentioned by the Government for the financing of the post-conflict investment will come from as it is clear the revenue will have to be raised by other means and, particularly, with the participation of the industrial sector.

The decree project has been published for comment until 21 April.

MIGUEL ÁNGEL HERRERA
Miguel Ángel Herrera is a Partner and President of Agora Public Affairs & Strategic Communications in Colombia, following a 17-year career at Burson-Marsteller. For the past two years, Miguel has been selected by the magazine La Nota Económica as one of the 500 leading executives in Colombia.

OTHER TEXTS BY MIGUEL ÁNGEL HERRERA